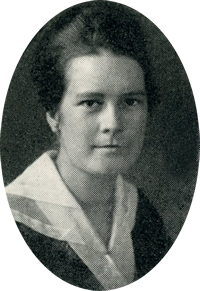 Peroma Staff, Carol Club.
“She speaks, behaves, and acts as she ought”

Graveside rites tentatively are scheduled for 2 p.m. Tuesday at Grace Hill cemetery at Perry. Arrangements are under direction of Brown Funeral home of Perry.

Mrs. Henriksen was the daughter of Judge William Bowles and his wife, Clara. She was born Nov. 14,1899, at Perry. She attended Lindwood college at St. Charles, Mo., and was a member of Alpha Chi Omega sorority.

In addition to her husband, she was preceded in death by her parents and one brother, Ed.