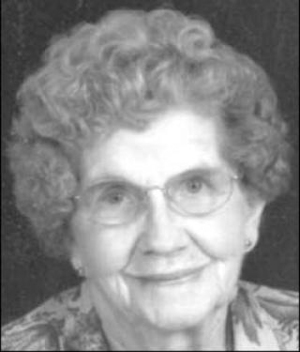 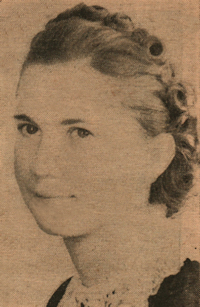 – daughter of Mr. and Mrs. L. W. Thele, of 111 Birch street, was a member of the Girl Reserves and the Home Economics club. She attended St. Joseph Academy and Perry High School. Mary was born in Perry in 1921 and has lived here since. She has worked for some time at McClellans Store.

Mary Elizabeth (Thele) Nelson, 87, of Perkins, our beloved mother, grandparent, sister, aunt and friend, died on Tuesday, Feb. 24, 2009, at her home in Perkins. A rosary will be held at 7 p.m. Sunday at Saint Francis Xavier Catholic Church. Mass of Christian burial will be at 10 a.m. Monday at Saint Francis Xavier Catholic Church with Father Kenneth J. Harder and Father Gary Kastl officiating. Interment will be in Glenwood Cemetery. Strode Funeral Home is in charge of arrangements.

Mary was born on Sept. 28, 1921, at her parents’ home in Perry. She was one of 11 children born to Louis W. Thele and Mary Anna (Miksch) Thele. She grew up in Perry where she married Lee Roy Nelson of Perkins on March 25, 1940. They lived in and around the Perry/Perkins region before farming in the Hooker area for six years and Granada, Colo., for four years and then moved back to their Perkins farm. They started and maintained a dairy for approximately 18 years before selling the farm. Lee Roy preceded her in death on February 17, 1972.

Mary remained in the Perkins area while she worked at Oklahoma State University as a housekeeper for 20 years. Mary devoted her time and energy to family and church. Raising four children she was involved in all the associated activities such as 4-H club, class parents, band boosters, etc. She had a very generous heart, helping those in need by cooking meals, transporting to doctors appointments and church, or just visiting.

She was a member of the Saint Francis Xavier Altar Society and church council, serving as an officer in both. She was on the Glenwood Cemetery Association Board of directors, finished her husband’s term on the Perkins City Council, and was a member of the Stillwater Art Guild, Home Demonstration Club, and the Monday Stitch and Bitch Club. After all that she still had time for crocheting, painting, sewing, and quilting for her children and grandchildren.