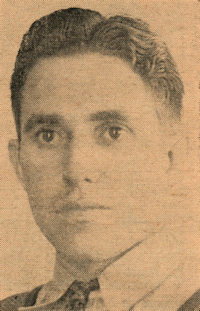 ﻿- has worked in oil fields and has participated in football and basketball since he has been in Perry High School. Prior to coming to Perry, he attended schools in Minden Mines, Mo., and at Lakeside, Kans. He was born at Pittsburg, Kans., in 1918. He is the son of Mrs. Mollie Shireman of 719 Grove street.

Albert Marion Shireman was born March 23, 1918, in Pittsburg, Kansas, and was married in 1944 to the former Betty Jean Ewy. He came from Kansas in 1933 and attended Perry High School. A member of Battery C, 158th field artillery, he transferred to the Navy in 1942. He received his discharge in 1945.

In addition to his wife, he is survived by four daughters and one son; his father; and two brothers.