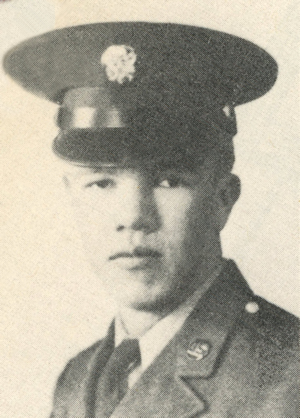 He is a member of troop 15, Boy Scouts of America, and appeared in both the junior and senior class plays. He also has taken part in the band and in the mixed chorus.

A member of the National Honor Society, David plans to attend Park college after graduation here. Photography and stamp collecting are his favorite hobbies.

Sergeant Thomas was wounded slightly in Holland October 26, but had since returned to duty with an infantry outfit. He recently had been promoted to sergeant from private first class.

Thomas was an outstanding student during his school days at Perry high school, from which he was graduated in 1941, and was president of the student council and the National Honor society during his senior year. He was a Daily Journal carrier-salesman for several years.

He won a place in the army’s student training program following induction into the army and studied at Rutgers university, Rutgers N. J. until the training program was abolished, then he was assigned to Camp Carson, Colo. He was formerly a student at Park college, Parkville, Mo.

Thomas holds the Purple Heart for his wound in Holland and the combat infantryman’s badge “for exemplary conduct in action against the enemy.” He was cited February 9 in recognition of outstanding performance of military duty in Germany on November 23, 1944.

A brother, Harcourt Thomas is an army aviation cadet.

﻿Served with the “Timber Wolves”, 104th. Infantry Division, 413th Regiment. The citation with the Silver Star read in part: “Skillfully maneuvering his squad in advance to relieve a besieged platoon, Sergeant Thomas exposed himself to enemy fire to lead his men forward. Reaching a point 25 yards from an enemy machine gun, he coolly raised himself to an upright position, shot two enemy soldiers and rushed the enemy positions. In the fierce fire-fight that followed Sergeant Thomas was mortally wounded, but his men, inspired by the gallantry of their leader, captured the objective.” Died March 25, 1945, in action in the vicinity of Asbach, Germany.