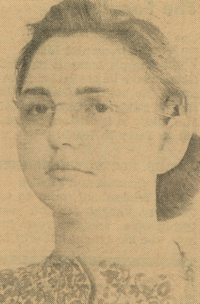 – hopes to become an expert surgical nurse. She will enter training at St. Anthony’s Hospital in Oklahoma City after graduation. Her hobbies include collecting rocks and reading the latest books. She was in the senior play and is the recipient of several perfect attendance certificates. She is the daughter of Mr. and Mrs. V. A. Swanson. She was born here in 1921 and has always attended school in Noble county.

Born March 17, 1921, in Perry, Okla., she was a daughter of the late Victor Albert Swanson and Antoinette Zmotony Swanson.

Mrs. Sparks worked for 14 years as a licensed practical nurse at Henry County Medical Center and was a member of First Presbyterian Church.

She also was preceded in death by a son: Roger Sparks in infancy; and two sisters: Dorothy Reilly and Thelma Ennis.