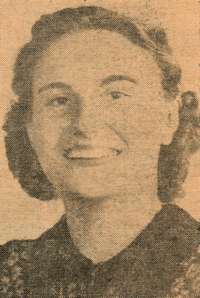 – daughter of Mr. and Mrs. Frank Dolezal of near Perry, will graduate as the student having the highest attendance record in the class. She was in the Senior Play and was a member of the Red Hots. She was born in Buhl, Idaho, and came to Perry before she was of school age. She like many others is a swing fan and likes all kinds of sports. She is undecided as to the future.

Mrs. Kaiser was the daughter of Frank and Victoria Dolezal and was born Oct. 8, 1922, at Buhl, Idaho. She moved with her family to the Perry community when she was six months old. She was a 1939 graduate of Perry high school and attended Draughon’s school of business in Oklahoma City.

She and Raymond Kaiser were married April 24, 1944, at Denver, Colo. Mrs. Kaiser worked as an executive secretary for a number of years and most recently had been employed in the foreign language department at Oklahoma State university and the department of vocational technical education. She was a member of the Catholic church.

In addition to her husband, Mrs. Kaiser was preceded in death by her mother and one daughter.