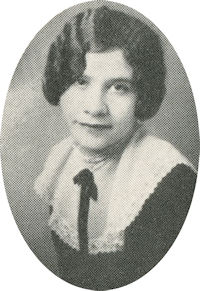 Mrs. Kingelin had been in Perry for the Tuesday funeral of her sister-in-law, Mrs. Frank (Victoria) Dolezal. She was returning home and was about 15 minutes from Jacksonville when the accident occurred. Exact details of the wreck were not available Friday.

Born June 30, 1909, at Perry, she was the daughter of Joseph E. and Mary J. (Kasl) Dolezal. She was a graduate of Perry high school and Oklahoma College For Women. She taught school at Sumner before she and George J. Kingelin were married June 14, 1934, at Perry. Kingelin preceded his wife in death July 14, 1978. Mrs. Kingelin was a member of the Presbyterian church at Henderson, Texas.