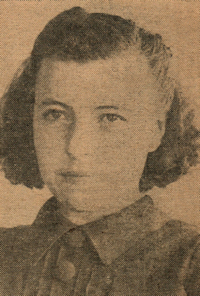 ﻿- daughter of Mr. and Mrs. Henry Wilde of 1210 Ivanhoe, will attend a beauty school in Oklahoma City following graduation. Margie’s first schooling was received at the Lutheran school and then she went into Perry high school. She likes sports and snapshot collecting. For the past two years, she has been in the glee club and in the school operettas. She was born at Orlando in 1922.

Trudie will be deeply missed by Kathy Spreigl and her family who have been Trudie’s special “Minnesota family” for many years and former daughter-in-law, Linda Aasen who cared for Trudie in recent years. A special thank you goes to the staff at Cerenity Care Center on Humboldt for their loving care.

A service celebrating Trudie’s life will be held at 7:00 p.m. on Thursday, December 27th at King of Kings Lutheran Church, 2330 Dale Street, Roseville. Visitation will be one hour prior to the service at the church. Interment, Fort Snelling National Cemetery 10:30 a.m. Friday, December 28th.