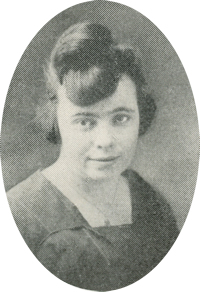 Club Espanol
“Nothing ill could dwell in this temple.”

Funeral will be at 10 a.m. Tuesday at Parker Funeral home with Rev. Robert S. Bazzell, pastor of the Ceres Baptist church, officiating. Burial will be at Grace Hill cemetery. Casket bearers will be Derrell Sullins, Bertsel Ratliff, Ed Nemechek, H. A. Linn, Jess Osborne and Floyd Holland. Memorial contributions may be made to the Oklahoma Medical Research Foundation for heart research.

Mrs. Megenity was a member of the Ceres Baptist church and was a charter member and past worthy matron of the Red Rock chapter of the Order of the Eastern Star. She had been in ill health one and one-half years.

Mrs. Megenity was preceded in death by one brother.