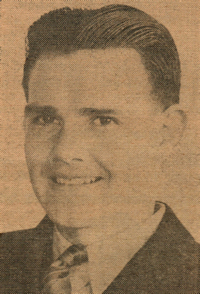 – is the son of Mr. and Mrs. Frank Mickish of near Perry. Willie was born here in 1921 and has always attended schools in Noble county. He was interested in football, wrestling and student council work in high school. He was outstanding in F. F. A. work and took part in other activities including the high school operetta and the senior play. Swimming and photography occupy his spare time. He plans to complete his education at Oklahoma A. and M. College with a course in animal husbandry.

Mickish, the son of Frank and Teresa Mickish, was born at Perry on Nov. 5, 1921. He attended rural school and graduated from Perry High School.

He attended Oklahoma A&M College for one year before entering the Army Air Corps on Sept. 16, 1940 at Brooks Field, TX. Mickish was accepted as an aviation cadet and received his wings on Jan. 14, 1943.

His extensive military service included World War II missions over Burma, China, India and Japan in the Pacific Theater while a B-29 pilot. He was taken prisoner of war in Tashkent, Russia after landing his disabled aircraft in a field near Valadivostok.

Mickish and Doris Kathleen Bart were married on March 30, 1946 after he returned from Russia.

His first wife died in 1993. Mickish and Margaret Wender were married in 1994.

He was a member of Shepherd King Lutheran Church and had resided in San Antonio for 37 years.

In addition to his first wife, he was preceded in death by one son, his parents, two brothers and three sisters.