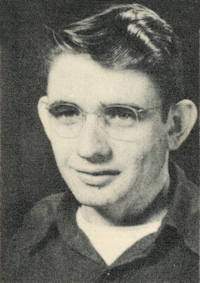 Arrangements for services were pending Wednesday with a Wichita Falls funeral home.

Survivors include his wife and son, Paul, of the home address; three brothers, Kenneth of Shawnee and Larry and Clarence, both of Oklahoma City; and one sister, Mrs. Richard (Mary) Witter; Perry. He was preceded in death by his parents, Mr. and Mrs. Walter Enright.