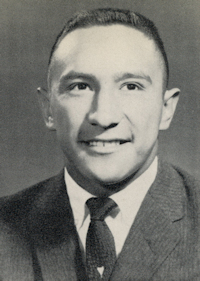 ﻿Funeral will be at 10 a.m. Monday at the Otoe Baptist church at Red Rock for Billy Don Faw Faw, 52, Enid, formerly of the Perry community.

Rev. Duane Pratt and Rev. Rick T. Milam will officiate. Burial will be in the Otoe-Missouria cemetery at Red Rock under direction of Henninger-Allen Funeral home of Enid.

He was born Oct. 1, 1941, at Pawnee, the son of Louis and Edna (Dupee) Faw Faw. He attended Perry high school where he was involved in sports. Faw Faw was a 1959 state wrestling champion. He attended Lamar Junior college at Lamar, CO.

He and the former Deanne Griffin were married on Oct. 11, 1990, and lived in Ponca City before moving to Enid in 1992. Faw Faw was a member of the Olivet Baptist church and served as president of the Otoe Senior Citizens Advisory Council.

Faw Faw was preceded in death by his parents, one brother and one sister.