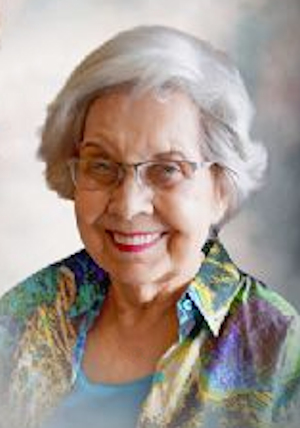 – was born in Perry 18 years ago and has lived here 16 of those years. She is the daughter of Mr. and Mrs. J. A. Samuelson, route three.

All of her schooling was taken in Perry except the first and second grades which were taken in Enid. She has been a member of the girls glee club, mixed chorus, girls’ quartet, girls’ sextet, and girls’ trio. She was in her senior class play.

Verna Jeanne reached the station of worhty advisor in the Order of Rainbow for Girls. She received her majority service May 5. She was married in April to Paul Nicewander, PHS graduate of ’42.

Graveside Services will be held at 10:00 a.m., Friday, September 15, 2017, at the Grace Hill Cemetery with Andrew Nicewander officiating under the direction of the Brown-Dugger Funeral Home.

V. Jeanne Samuelson Nicewander was born April 28, 1925, in Perry, Oklahoma to John August and Marie Genevieve (Beardsley) Samuelson. She grew up in Perry, Oklahoma and graduated from the Perry High School. Jeanne was a bookkeeper for Commercial Lumber Company for many years. She was a member of the Tulsa Bridge Club, First United Methodist Church, and Sweet Adelines of Tulsa. She loved to play bridge, sing in the Aberdeen Choir, play cards, eating, piano, reading, extreme couponing, square dancing, bowling and animals.