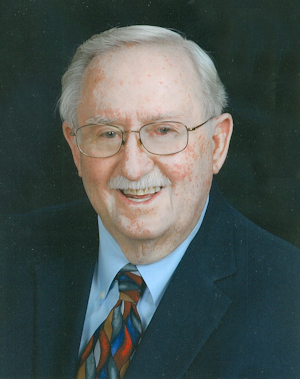 Harold Brothers, the first president of the Perry High School Alumni Association, served in the Navy and was a coach for youth teams in several Oklahoma cities as well as being an insurance agent.

Harold moved to Perry with his mother and stepfather, Pansy and Wilbur Toone, from Colorado. He entered third grade in Perry. In Junior High School, Harold participated in many activities, including football, baseball, and basketball. He had a superb singing voice. Harold played in the band until forced to choose between band or football, and he chose football.

Harold lettered all four years of high school in baseball. The first pitch he threw, as a freshman starter, was against Blackwell. The batter hit the ball so far that Harold thought it would never be found. Team-mates Gee Terronez, Rod Hamblin, Burl Carrier, Virgil Milliron and others came to the pitcher’s mound to tell him not to worry, just to play his best, they would back him, and Perry would win. Harold finished the game with a score of 7-4 in favor of PHS! In High School basketball, Harold started every game as a Junior and Senior. He lettered in High School football playing as an offensive and defensive back, and also shared kicking duties with Richard Hileman.

During the fall of 1952, Harold enlisted for active duty in the U.S. Naval Reserve, and after training was assigned to the U.S.S. Fulton. When not at sea, Harold pitched for the Ship’s baseball team in the old class D pro-league, from which some players advanced to the major leagues. He pitched one no-hitter in league play. After his release from active duty, Harold followed his good friend, Clane Kirtley, to Southwestern State University where Harold became a member of the University’s baseball team. Harold was awarded a Bachelor of .Science Degree in Education in three and a half years.

Mr. Brothers’ first teaching and coaching job was at Colony, Oklahoma, where he coached all of the high school’s basketball, baseball, and softball teams — both boys and girls. Harold moved to Mangum, Oklahoma, where he also taught school and coached the girl’s junior high basketball team, which only lost one game in two years. Then, they won two consecutive state championships in high school. In 1961, Harold received a National Science Foundation grant at Southwestern State and earned eight hours credit; the following year, he earned eight hours of credit at Kansas State University. Harold and his family moved to Blackwell during this period, where he taught science, coached junior high football, basketball, and also was the assistant high school baseball coach.

In 1963, Harold was recruited by the Fidelity Union Insurance Co. and has worked in all phases of that business for the last 46 years. His first insurance agent job was in Ada. In 1964, he was transferred to Norman as a General Agent for the same company. He was active in coaching Optimist League football and basketball. One of his teams entered the State AAU, Age 12 and Under Basketball Tournament, and finished second in the State. From 1976 to 1979, he helped coach the American Legion Baseball teams. Harold has continuously been a spiritual leader in his Church and among his friends.

Harold cites as some of the people who have had a positive influence on his life, the Zorba family, the Al Singletary family, Reverend Bill Campbell, the Corr Family, Joe Ripley, “Hump” Daniels, Byard Anderson, Bud Nichols, and Lee T. Mahan.

Harold met his wife of 52 years, Sue Bunch, while attending Southwestern State, where she was also a student. They were married in 1957 and had a daughter in 1958. They also had their son, Brad, their daughter, Brooke, and their son, Hank. Harold presently has six grandchildren, and three great grandchildren. Harold says: “It’s hard to be humble, when you’re a Perry High School Maroon! But I am humbled by this award.”

For more about Harold and the PHS Alumni Association, see About Us on this website.